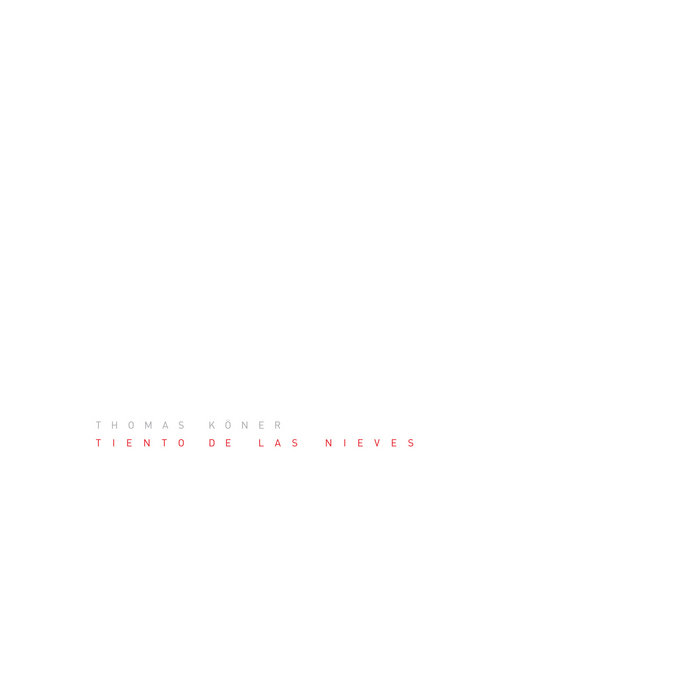 "Love is life’s snow. It falls deepest and softest into the gashes left by the fight—whiter and purer than snow itself. What is life without love? It is like this ice—a cold, bare, rugged mass, the wind driving it and rending it and then forcing it together again, nothing to cover over the open rifts, nothing to break the violence of the collisions, nothing to round away the sharp corners of the broken floes—nothing, nothing but bare, rugged drift-ice." Fridtjof Nansen 'Farthest North : Being the Record of a Voyage of Exploration of the Ship Fram 1893-96, and of a Fifteen months' Sleigh Journey'

Thomas Köner, explorer, multimedia artist, dark ambient pioneer. Over his long, much celebrated career, he has worked between audiovisual installation works, sound art, minimal soundscapes, and as one half of Porter Ricks. Among others, he has composed film soundtracks and music to accompany historic silent films for the Louvre Museum and the Musée d'Orsay, Paris, who called him a major innovator in the contemporary music scene.

Tiento is a form of keyboard-based music originating in Spain. In his past discography, Thomas Köner has mostly used the piano in a barely recognisable way, as one element of many. However, after a particular radical experience he found himself caught with the piano in his focus, with this rigid instrument which has been developed and solidified in the 17th century just to enslave composers and musicians for centuries to come. Thus, it could come as a surprise for those familiar with Köner's work and attitude, that in his first tiento to be released -- "Tiento de las Nieves" ("snow-tiento") -- he uses the piano, as an instrument, in an un-deconstructed way.

To escape and handle the rigidity of the piano, Köner uses his distinctive ansatz to understand music rather as something filling the space of the temporal dimension than as a succession of multi-layered sounds. For him the musical score of any of his pieces is a priori meaningless, and receives meaning only by placing the notes and sounds at particular points in time in a way which is forced upon them by their inner logic. Like atoms in a particular molecule, these notes ought to have a specific distance and order dictated by certain laws, they might have to occur repeatedly, in order for the musical piece to be physically stable and complete, and thus to be able to exist continuously.

For this reason, "Tiento de las Nieves" turned out to be a 68-minute long single piece. Upon producing this tiento, Thomas Köner had a strong and clear sensation of a large white space. Norwegian explorer Fridtjof Nansen has always been an important figure for Köner. In a quote from his expedition account 'Farthest North', Nansen constructs a synthesis between love and snow. With this piece Köner builds a bridge between his associated sensation of a large white space and the snowy, foggy landscapes known to him from his various own expeditions, in a quasi dialectic process.